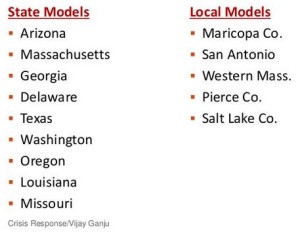 National Dialogues for Behavioral Health committee president Vijay Ganju was one of the keynote crisis track speakers at the Orlando 2015 National Council conference, and he highlighted the examples of national models in crisis services at right.

That same year, the state of Kentucky challenged the idea that very few individuals who die by suicide are engaged in the public community mental health system of care, estimating that 24 to 30 percent of people who died by suicide in Kentucky in any given year had received services from the public behavioral health system in the 12 months before their death. Similar patterns have emerged in other states conducting such analyses, confirming the need for change if the rising number of deaths for people under care is to be reversed. We also have anecdotes that reveal a rising number of tragedies that might have been averted.

In November 2013, Virginia State Senator Creigh Deeds told CNN that he was alive for just one reason: to work for change in mental health. Just a week earlier, his son “Guss” stabbed him 10 times and then ended his own life by suicide. This happened only hours after a mental health evaluation determined that Guss needed more intensive services, but unfortunately, he had to be released from custody before the appropriate services could be found.

If aviation safety simply targeted 99.9% effectiveness, there would be nearly 300 unsafe landings and/or take-offs per day. By contrast crisis care in America is fragmented, operates without national standards and many communities lack basic crisis services. Where crisis systems exist, they usually are not utilizing the most basic principles of safety and accountability to ensure individuals do not fall through the cracks. It’s time to stop wringing our hands after tragedies, and re-think next generation crisis systems.

In the late 1990s, there were crisis call centers across the country, but they were fragmented and lacked credibility with even suicide prevention advocates. Staffed with volunteers, these poorly funded programs lacked technology, data-tracking, and consistent protocols. Many questioned whether there were outcomes that warranted the investment, meager though it was at the time.

15 years later SAMHSA-funded research by the University of Quebec at Montreal, Rutgers and Columbia has changed everything. Standardized protocols are used internationally, and funders are investing millions in statewide, advanced crisis call centers that coordinate care and create more efficient flows and access to needed services. Simultaneously, evidence has emerged that crisis respite centers and other elements of comprehensive crisis care systems can provide safe and less expensive care than inpatient settings, which often serve to provide costly, short term “containment” of people under great stress.

The Crisis Services Task Force will mark the formal beginning of professional orientation and standards development for crisis systems of care and all levels of crisis services, including mobile crisis and facility services like crisis stabilization and crisis respite. It’s also an effort to begin thinking about these services as parts of a whole, integrated systems of care, with a major focus to reduce and eliminate suicide, providing vital support 24 hours per day, every day for individuals and families at risk. This task force will create a second major pathway for accomplishing the Action Alliance transforming healthcare initiative, using a similar set of proven approaches that will touch a wider audience through the public sector’s crisis services and systems.

The Task Force is also timely because of potent changes underway in health care—catalyzed by national “parity” legislation and the Affordable Care Act–that include shifts in responsibility away from state mental health agencies to control by mainstream health systems. The recently released CMS proposed rules on Medicaid managed care signal and will accelerate this shift in behavioral health care away from a being separate, protected industry to being part of mainstream systems. Given that care will increasingly be managed by health plans, it is crucially important to lay down a marker on the essential components of high functioning crisis care and hospital diversion systems.

The Crisis Services Task Force will work a sprint schedule meeting every two weeks by GoToMeeting Video Conferencing from August 2015 to January 2016, with the objective of eight to ten meetings total.

The Crisis Services Task Force will drive the implementation of the revised National Strategy for Suicide Prevention (NSSP), with particular attention to goals eight and nine, and offer another key focus area for behavioral health and healthcare systems to save lives, with deeper penetration in the community at large than the general public sector behavioral health system has access.

The primary outcome of the task force will be a brief (i.e., up to 25 page) white paper, “Future Crisis Care/Hospital Diversion Systems: What’s Essential?” The white paper will prompt health plans, Medicaid and behavioral health administrators to consider the next generation of integrated crisis systems and what essential components are required. The hope would be that these recommendations become Zero Suicide in Healthcare expectations related to behavioral health and healthcare. Examples may include: