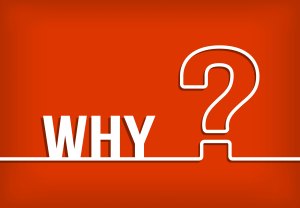 The most important question is always why. So, why do we do what we do in behavioral healthcare? Put simply, we seek to equip individuals with serious mental illness to live happy, healthy, productive, and connected lives.

On Thursday, August 31, 2017, the 21st Century Cures Act takes a very important step forward with the inaugural meeting of the Interdepartmental Serious Mental Illness Coordinating Committee (ISMICC). The ISMICC is composed of senior leaders from 10 federal agencies; including HHS, the Departments of Justice, Labor, Veterans Affairs, Defense, Housing and Urban Development, Education, and the Social Security Administration along with 14 non-federal public members. I am exceptionally appreciative of the opportunity to be a part of this amazing team.

HHS Secretary Tom Price will introduce the proceedings and review the charge to the committee and recently confirmed Assistant Secretary for Mental Health and Substance Use, Dr. Elinore McCance-Katz, will kick off a discussion of federal advances, challenges, and recommendations. The focus will be on outcomes; including rates of suicide, employment and education as well as other measures that might be used to evaluate the efficacy of efforts to address the needs of individuals who experience serious mental illness (SMI).

I’m very optimistic. The ISMICC charter and first meeting’s agenda point to a central focus on why. “WHY are we doing this work?” (HINT – It’s about real-life outcomes). It’s the best and right place to start, and should serve as a call to action to open our collective minds to a multitude of options of WHAT we might do and HOW we might do it to realize better outcomes.

In recent months, we in the field wrung our hands during the congressional debates over healthcare. Our talking points referenced WHAT we do: educational programs like Mental Health First Aid and services like case management and peer and recovery supports. We talked about HOW we deliver care and we contrasted our engagement now with the institutions of the 1950s. We looked at ways to do the things we have been doing better. These are worthwhile discussions. It’s so very easy to get caught up in the how and the what but it looks like we will now be challenged to dig deeper and focus on why we do what we do. This is not a completely foreign notion to many of us who have seen significant efforts in our Medicare and Medicaid programs to engage in value based contracting arrangements.

Several years ago, I was working as a counselor with a young man who was hard-charging through an advanced degree; seemingly destined for great success in life. He initially came to me because of grief around a broken relationship. Over the course of a six-month period, our team concluded that he was experiencing his first onset of serious mental illness.

Today, he would be in his 40s. As a person with a serious mental illness, there is only a one in five chance he will be employed. He would be twice as likely to be employed if he had instead been in a tragic accident that resulted in a visual, hearing or mobility disability. If unemployed, he would likely be missing the sense of contribution to community and the connection to others that many of us feel as a result of our work.

Additionally, he would be two to three times more likely to have developed diabetes, heart disease, or obesity than the general population. The average American has a life expectancy of 79 years. In 2006, the National Association of State Mental Health Program Directors (NASMHPD) found that a person with serious mental illness in the US dies on average 25 years younger than the general population (that’s 54 years). In comparison, the average life span in war-torn Afghanistan is 61 or seven years longer than someone with a serious mental illness in the United States. 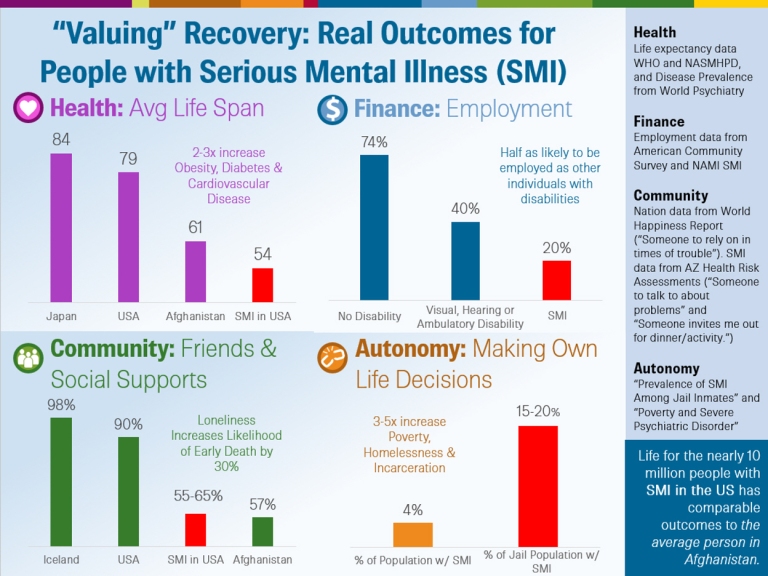 These outcomes are relatively well-known but in recent years more attention has been paid to the impact of non-medical determinants of health that warrant consideration. Holt-Lunstadt and colleagues conducted a meta-analysis of health outcomes that revealed friends and social supports are the single most powerful indicator of health life and longevity. Simply put, loneliness increases the likelihood of early death by 30%. For context, increasing one’s community connections correlates more closely to longevity than quitting smoking according to the study.

When Americans are asked if they have “someone to rely on in times of trouble,” 90% answer yes. In Iceland, the answer is nearly 100%. Not a lot of research has been done in this area for people with serious mental illness. However, Magellan Health contracted providers surveyed over 20,000 people with a serious mental illness in Arizona between 2010 and 2013 with similar questions about whether the person has “someone to talk to about problems” and “someone who invites me out occasionally for dinner/activity.” The findings would suggest that only 55-65% of respondents with serious mental illness  have “someone to rely on in times of trouble;” which is again on par with Afghanistan where 57% answer in the affirmative.

Lastly, the young man I saw all those years ago was accustomed to making decisions about his life. Tragically, many individuals with serious mental illness realize less autonomy and self-direction, and may even be incarcerated. Elyn Saks is a non-federal member of the ISMICC, an expert in mental health law, and a person who lives with schizophrenia. Her recent article in Politico, The Consent Dilemma, thoughtfully examines the negative impact of increasing coercion and force in behavioral healthcare treatment.

These real outcomes can be measured and tracked for improvements. I’ve summarized them in the balanced scorecard graphic (above), Valuing Recovery: Real Outcomes for People with Serious Mental Illness.

WHY do we do what we do in behavioral healthcare? We seek to equip individuals with serious mental illness to live happy, healthy, productive, and connected lives. It’s not only their illnesses that conspire with barriers to achieving these objectives, but our society also limits their potential success through low expectations and discrimination. We can and must move beyond a focus on symptom reduction and stabilization to support people beyond their behavioral health needs to succeed in the community where they live, work, and play.

Thomas Joiner’s groundbreaking 2005 work “Why People Die by Suicide” suggested that the two most painful experiences in life are loneliness and feeling like a burden to others. By contrast, he suggested that people who are connected and perceive they are making a contribution to others are protected. We tend to think of suicide as simply a symptom of serious mental illness, but the outcomes generally experienced by SMI individuals (lonely, unemployed, etc.) would suggest tremendous risk for any population. In fact, the hazard ratio for suicide for people with SMI dramatically exceeds other “at-risk” groups like LGBT, older white males, active duty military and veterans, and Native Americans/Alaskan Natives.

SAMHSA reported national expenditures for mental health treatment of over $200 billion in 2014. Despite this investment in services and programs, the typical outcomes experienced by the nearly 10 million people with serious mental illness in the United States look more like those from impoverished and war-ravaged Afghanistan.

The young man I worked with had a past, one in which accomplishing his goals in life seemed straightforward. He had a future in his mind’s eye, a roadmap for meaning and purpose. But if he experienced the outcomes most typical for people with serious mental illness, our view of him in the present would miss so much of that potential. This can change!

We can imagine that what he wants today may very likely be what all of us want in life. We want to make a difference in the lives of those around us. We want to work. We want friends and family that love us and that we love back. We want to live a healthy life. And we want to be the ones responsible for our decisions. These are the things that make humans happy, and their absence makes any one of us grieve.

Today, the national expansion of First Episode Psychosis programs led by SAMHSA based on the National Institute of Health’s Recovery After an Initial Schizophrenia Episode (RAISE) study is transforming care for young people just like the man described above. RAISE began with two studies of Coordinated Specialty Care (CSC) and a clear focus on the why, but the approach is too rare an example of starting our program development with the end in mind.

We in behavioral health have lost sleep this past year over the how and the what. But we started the Community Mental Health movement over 50 years ago with a strong why — introducing services and programs that would empower individuals with SMI to live in local neighborhoods, not institutions.

On first take, the ISMICC seems focused on the heart of the matter; on the outcomes experienced by those with schizophrenia, bipolar disorder, major depression, and other serious mental illnesses. It’s time again for us to ask and answer the question why and begin taking strong actions to achieve measured success.

I’m inspired that the ISMICC is returning our focus to the purpose of our work and I’m confident this approach will engender actions that over time dramatically improve the lives of those with serious mental illness.

Note: The SAMHSA website includes information to join the August 31 ISMICC Advisory Committee meeting by teleconference as well as additional resources like the ISMICC charter.

One thought on “Returning to the Why in Behavioral Healthcare”