“Is it rational to pursue zero suicide among patients in healthcare?” This is the question posed by Dr. Jan Mokkenstorm and colleagues in Suicide and Life Threatening Behavior Journal (in press) as they address objections that the science and published results aren’t yet in.

The US National Institute of Mental Health has just awarded a 5-year grant to Henry Ford Health System to evaluate an implementation of Zero Suicide across most of the Kaiser Permanente health system. And, Centerstone is partnering with EDC to publish its results in a peer reviewed journal (reductions in the death rate have been reported in US News & World Report, June 2015).

So, the science is in the works. But, here’s what we already know today.

Usual care is disastrous. Dr. Mark Olfson in the July 2017 JAMA Psychiatry carefully describes the very significant suicide risks for individuals in the immediate aftermath of a psychiatric hospitalization and the clear message for the efficacy of universal and continuing interventions and support following discharge. Yet, even when we know the practice works, only about half of US patients receive any outpatient care during the first week after psychiatric hospital discharge, and one-third receive no mental health care during the first month.

Outside inpatient settings, healthcare systems have simply not been accountable for suicide. Mental health professionals frequently report a complete lack of training to deliver interventions and care to prevent suicide. These standard approaches came under criticism in the New Zealand national media earlier this year. The Minister of Health’s response after studying Zero Suicide was to change the culture within the mental health workforce and galvanize society around known interventions. “It does seem that setting a goal, and it may be aspirational… actually just focuses efforts” (Dr. Jonathan Coleman, “Suicide Reduction Target Back on Table,” August 2017.)

The interventions that make up the elements of Zero Suicide are known to work. They all have research-based efficacy. Danish researcher Annette Erlangsen’s 2015 Lancet study showed a lower risk of deliberate self-harm and general mortality for those who received psychosocial therapy. In fact, direct treatment of suicide is more effective and cost-efficient than statins are for heart disease prevention (one fatal heart attack is prevented for every 83 people helped for statins versus one self-harm episode prevented for every 44 people treated with psychosocial therapy).

Findings are similar for routine screening for suicide risk. In 2015, Dr. Greg Simon and team concluded in Psychiatric Services that the PHQ-9 question 9 “identifies outpatients at increased risk for suicide attempt or death.” They added that “this excess risk emerges over several days and continues to grow for several months,” with an accuracy about twice as predictive of future suicide as cholesterol scores are of future heart attack death.

While there are few studies of safety planning, Craig Bryan’s findings in The Journal of Affective Disorders is promising (“Effect of crisis response planning vs. contracts for safety on suicide risk in U.S. Army Soldiers,” January 2017).

Finally, logic and the literature base on quality improvement suggest that we need a systematic, leadership-driven quality improvement approach for a wicked and complex problem like suicide. The Suicide Care in Systems Framework was published at virtually the same time as Dr. David While and others were concluding in the Lancet that a systematic implementation of crisis intervention in England and Wales saved hundreds of lives (February 2012).

So, as a scientific matter, we need more data. As a public health and quality of care matter, the evidence is already in.

The time is now. Together, we can, and must, do this. We hope this document created from the 2017 Sydney summit motivates healthcare and other leaders to move from an international declaration to local action and implementation.

Note: Special thanks to Dr. Sally Spencer-Thomas, Dr. Ursula Whiteside and Suicide Prevention Australia’s Nikki Kelso who provided invaluable support in developing the Sydney 2017 product, “Zero Applied: From International Declaration to Local Action” and to the speakers and sponsors who made it possible. 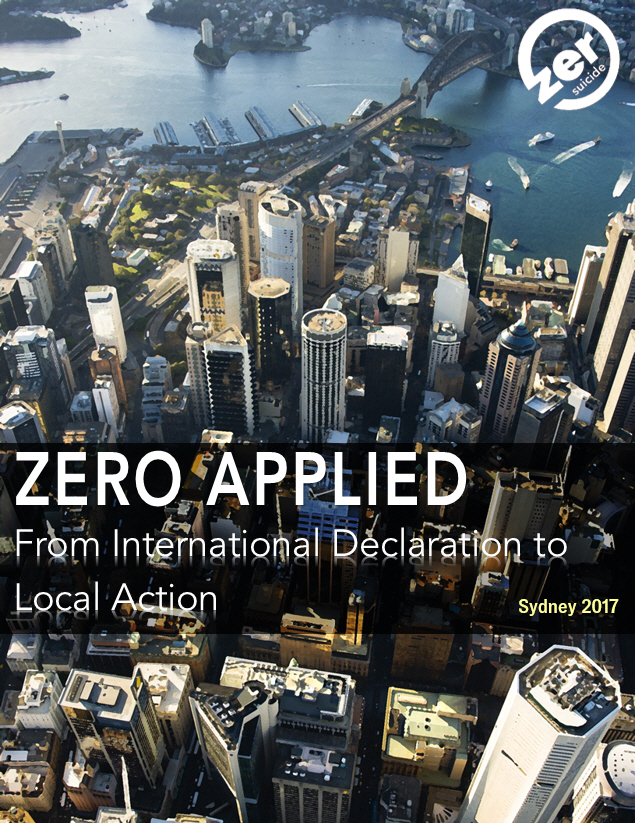