“Hey, look! It’s a pair of A-10 Thunderbolts!” The distinctive buzzing hum of the planes’ turbofan blades distinguished them as “Warthogs” well before I could make them out. The four of us stood in the parking lot of ConnectionsAZ Crisis Response Center and admired these marvels as they lined up in the sky above us for landing at Tucson’s nearby Davis-Monthan Air Force Base.

Hours later, during our return drive to Phoenix we reflected on our tour and the striking success that can be achieved when a group knows exactly what they want to do… and then just does that and little else.

The A-10 has one mission only: destroy tanks. Period. Its front landing gear offset from center, the plane was literally designed around the 30 mm Gatling rotary cannon, which sprays depleted uranium armor-piercing shells at rates of nearly 4,000 rounds per minute.

Targeting small, slow-moving targets is difficult for fast jets. The A-10 flies low and slow to accomplish its singular mission and this means absorbing significant amounts of damage. In order to stay focused on its mission, the A-10 engines and pilot are wrapped in 1,200 pounds of protective titanium armor. All so that it can… destroy… more… tanks. That’s it.

In Good to Great, business visionary Jim Collins describes the magic that occurs when a team crystallizes their reason for being and refuses to be distracted by anything else. He contrasts the fox, which is good at many things, and the hedgehog which is the master of one thing. Like the A-10.

Dr. Margie Balfour is Chief Clinical Officer at the Crisis Response Center in Tucson and also serves as Vice-President for Clinical Innovation and Quality at ConnectionsAZ. Dr. Balfour graciously facilitated a tour of this state of the art facility which was opened in 2011.

The result of a $50 million community bond, the Crisis Response Center facility housed crisis stabilization, with 23 hour observation and sub-acute residential beds, and separate units for adults and children. A secure “sally port” facilitated transfers from law enforcement, and a covered walk-way connected the facility to Banner University Medical Center South Campus, which includes an emergency room and acute care psychiatric inpatient unit next door. In addition, a crisis call center and peer warm line was co-located in this fully integrated and coordinated model.

In the original approach all these different services were subcontracted through a single vendor, an approach that might be described as “foxy,” to borrow again from Jim Collins.

On April 1, 2014, ConnectionsAZ began operating the crisis stabilization programs inside the Crisis Response Center, and Dr. Balfour relocated from Texas to Tucson to provide the medical leadership. A circuitous career path that started off as a scientist prior to developing a passion for clinical in public sector behavioral health established a foundation for a new kind of precision and focus.

If the A-10 singular mission is dispatching tanks, what is it for crisis?

It seems self-evident that crisis services should be about getting the best care to people experiencing a psychiatric emergency… FAST. It’s an emergency, and the response should match. When the call comes in, the firefighters proverbially slide down the pole and roll the trucks. Remember the opening theme to the long running NBC hit ER… everyone is running! Lives depend on it.

Yet, the reality of crisis services is often the exact opposite. It can take hours or even days in an emergency department to be “medically cleared” before entrance is granted to many of the nation’s crisis stabilization programs. Law enforcement and first responders are expected to take the person in crisis to the hospital first, not the crisis unit.

The experience of the over 13,000 individuals that utilized the services of the Crisis Response Center each year had been uneven. There were often long delays in the clinical triage area while the patient awaited a decision on whether they would be admitted or discharged. Frustration abounded, which was compounded because the same questions were repeated several times during the process.

The result was a decrease in safety and increase in injuries and assaults. Individuals in crisis were sometimes left unattended for long periods of time and staff were spread thin between the crisis programs and interview areas. Security was frequently involved.

There was a significant need to improve and speed the triage process, but there was a lack of agreement on the mission of the facility. Dr. Balfour and the ConnectionsAZ team met with the leadership and front line staff in a series of town-hall meetings, conducted rounds in the facility to interview patients and staff, and worked shifts providing clinical care to view the experience up close and personal.

The result of this process was an A-10-level singular mission: Meet the immediate needs of those in behavioral health crisis in a safe and supportive environment.

In order to re-engineer the Crisis Response Center for this new mission, Dr. Balfour and team utilized Lean Six Sigma. Motorola and Toyota both revolutionized process improvement, by eliminating waste and improving the flow of manufacturing, and by building upon the pioneering work of Edwards Deming in the 1950s (think Plan-Do-Study-Act). Healthcare has been slow to catch the vision, and crisis care for behavioral health has been characterized by waiting in lines, for both the patients and the various internal and external agencies with whom these programs collaborate.

The team began by establishing some assumptions. They would achieve gains with the existing resources and staffing by standardizing the process and eliminating waste and inefficient practices. They also introduced a number of interventions, including improved dashboard tracking tools.

The value analysis found that the old process required almost 11 hours, and that nearly 40% of this time was simply unnecessary and non-value added. Wasted time. For individuals and family members dealing with a behavioral health crisis. Idly sitting in the waiting room was a significant portion of this time, but there were also inefficiencies in some of the other tasks that needed to be improved.

The outcomes were Thunderbolt! They decreased the “door to door dwell times.” The average time spent in the triage clinic decreased from seven hours to two hours, and the time in the 23 hour unit decreased 30%, improving not only the patient experience but also the capacity through improved through-put.

Even if you haven’t been in a psychiatric crisis, most everyone has been to the emergency room, and the key metric we all remember… how long did it take us to see the doctor? Dr. Balfour’s team reduced the waiting time by nearly 80%. These significant gains had other cascading benefits. For example, the facility reduced dramatically the time it spent on diversion so that it could better serve the needs of those in crisis in greater Tucson. Assaults to staff and calls to security were also dramatically reduced, and the changes in process yielded additional space. The building was remodeled to take advantage of these improvements and the capacity of the temporary observation unit was increased by 36%.

Dr. Balfour believes there were several key ingredients in their success. They engaged everyone from top leadership to the line staff. They kept compliance and quality functions separate, and obtained Lean Six Sigma green belt certification for quality staff. And, they built the IT and data system necessary to track and report accurately on the performance.

When I think of the A-10 level focus of the ConnectionsAZ culture, the metric that comes to mind most readily is law enforcement drop-off turnaround time. First responders don’t take people in crisis to the emergency room first. They drive straight to crisis facilities in Phoenix or Tucson where they spend between five and ten minutes before returning to their patrol.

Precision and focus. Business is changing healthcare, and lean six sigma has come to psychiatric crisis services. The results are in, and it’s time for us to re-model our own A-10 Thunderbolts.

We can measure our performance and progress through the levels below.

Note: Dr. Margie Balfour will be one of the presenters at the National Council for Behavioral Health conference in Las Vegas on March 7 – 9. Also, check out her article: “Crisis Reliability Indicators Supporting Emergency Services (CRISES): A Framework for Developing Performance Measures for Behavioral Health Crisis and Psychiatric Emergency Programs,” Community Mental Health Journal, 2015 (download here), which includes the outcomes model below. 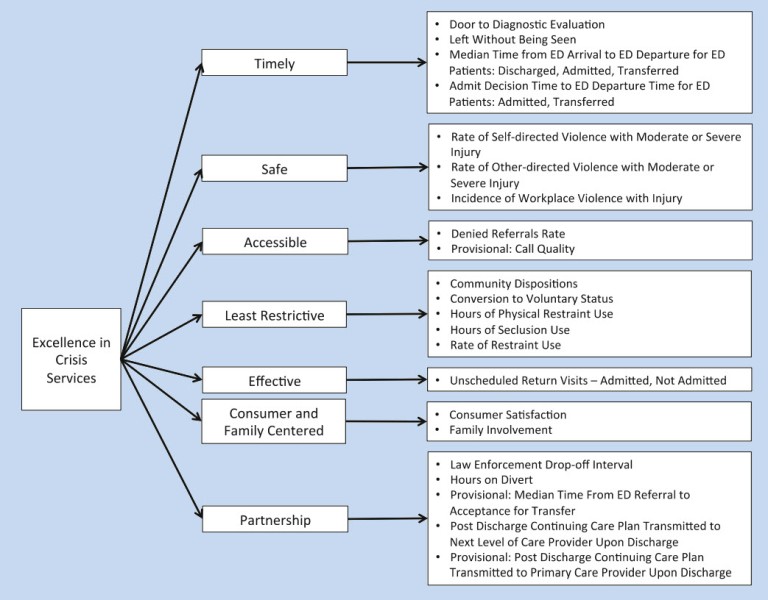