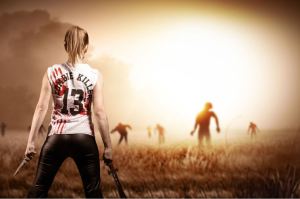 Think back to this time last year. A little story was lurking somewhere behind Kim Kardashian breaking the internet. We simply weren’t paying it much attention.

In fact, the “little story” was only the largest Ebola epidemic in human history, affecting multiple countries in West Africa. More than 25,000 individuals were diagnosed with the disease, and more than 10,000 succumbed to the scourge, including many healthcare workers.

Despite this, the disease wasn’t much on the minds of most Americans. But that all changed on September 30, 2014 when the CDC announced that a 45-year old from Liberia, Thomas Eric Duncan, had been diagnosed…not thousands of miles away in West Africa, but while visiting family on US soil…in Dallas, Texas. He was treated at Texas Health Presbyterian Hospital in Dallas, and within two weeks, two nurses who had treated Duncan also contracted the infection.

Our response? Naturally, we panicked, imagining a full-scale zombie-like invasion and the total breakdown of civilized society. And those fears of contagion spread faster than lightning. For example:

However, Ebola did not hold exclusive claim to fear of contagion in 2014.

After the death of beloved actor Robin Williams last August, The New York Times reported, “suicide contagion is real,” and suggested there was science to prove it. This idea argues that vulnerable people exposed to repetitive or promotional coverage about suicide, including using the word “suicide” in the headlines, talking about the means of suicide, and/or presenting death as an escape, will lead to an increase in suicides.

In fact, the Academy of Motion Picture Arts & Sciences received much heat over their tweet, “Genie, you’re free.”

I don’t doubt this tweet comforted many grieving the death of someone they felt they knew, but also prompted The Washington Post to express concerns regarding the dangers of infecting others with thoughts of suicide through social media and the news. It would be better, many think, to not talk of it at all.

Think youth sex education. Many believe if we talk about birth control, we will give young people an idea they didn’t already have. But that’s not the way it works, and Columbia researcher Dr. Madelyn Gould has disproven the myth that the idea of suicide will infect someone who doesn’t have it.

Fear of contagion, whether it be of disease or increased suicides, is not always based upon facts. What seems to get lost in all the media hoopla is the actual risk of contagion.

Disease researchers use a basic metric to estimate how many people on average each sick person will infect. According to Wikipedia, “The basic reproductive rate (R0 or R nought)] is calculated by estimating the chances of exposure, number of susceptible persons, length of contagious period, how the disease spreads, and how much time passes between exposure and becoming contagious.”

Using this scale, one of the most infectious diseases we know of is measles. Measles is an airborne disease and leads to infection on average of 12 to 18 people for every one person infected. The 2014 measles epidemic in Disneyland started with one person, and from that, 117 people became infected (mostly those who were not vaccinated).

HIV/AIDS typically spreads to 2 – 5 other persons thru sexual contact. The 2003 outbreak of SARS had a similar R0.

By contrast, Ebola, which is communicated only through bodily fluids and only while a person is showing symptoms, is much more difficult to spread, with an estimated infection rate of 1 to 2 persons on average.

The goal of public health is to drive R0 for any disease to < 1, which is the difference between it dying out or it becoming more widespread.

Ebola is no less serious than SARS, measles, or influenza, it just doesn’t spread as easily. In fact, it is the least communicable of all well-known infectious diseases, and THIS is the simple fact most Americans missed.

In comparison, suicide simply does not have an R0. It is NOT communicable in the same way infectious diseases are.

And yet, researchers struggle with how best to describe the increase in deaths that can occur after a high-profile (and widely reported) death by suicide, or the apparent clusters of suicides that sometimes happen in small communities.

Herald.ie featured a story of a cluster of four young girls who died by suicide within a very close time frame in small communities just outside Dublin, Ireland. The three large dots in their map represent three girls who were just 13 and 14 and died within three weeks. A 17-year-old girl had died before Christmas. The girls all knew each other and had common friends.

Hence, the question: If suicide is not contagious, then why does someone take their life only days after a fellow student, close friend, or revered media figure has?

Perhaps the answer lies in my experience with The Spartan Race, a mudrunner event I participated in a few years ago. For the uninitiated, this race is like boot camp, Survivor, and a 10K, all rolled into one.

Before this, I had never contemplated quitting a road race, but as I stood looking up at the unscalable wooden wall in front of me, I assumed this would be the one. My first attempt at clearing the wall failed miserably. Head down and in despair, I began looking for the exit when, out of my peripheral vision, I spied a middle-aged woman racing past me toward the wall. Undaunted, she threw her foot into the wall, catapulting her high enough for her fingers to grip the top. In the next instant, she flung a leg up and caught the edge with her toe, pulled herself up, and flopped over the wall. Gone. I’m a foot taller and have a runner’s build, yet she cleared the wall.

Did I observe her technique? Yes. In fact, I replicated it exactly. But the most powerful motivator was not tactical; it was the sudden belief that I could now do something that only seconds earlier was unattainable. Prior to that moment, I desperately wanted to clear the wall, but knew I could not. Watching her do it, though, was like flipping a switch. My mindset changed and I cleared it easily on my very next attempt.

People want to die when their deep anguish and belief that their life has no value intersects with an abiding loneliness that aches in the soul. The desire to die by suicide isn’t catching; it’s a response to intolerable emotional pain. The overwhelming majority of these individuals already stand in front of the wall, head down, wanting desperately to get over the wall, but they assume it is impossible.

Surely, skills are observable and techniques can be learned quickly, but what is truly contagious is courage: believing it can be done because you witnessed it. “If they made it over, perhaps I can, too.”

This is what frightens those in the suicide prevention field and what leads us to advocate for more thoughtful and careful media coverage after a reported suicide. When people die by suicide, others around them, also struggling with unbelievable pain, are suddenly at greater risk, because the “courage” that is most often shared in the media has to do with ending one’s life.

We should be investing our time and effort on media stories about individuals who have survived suicide attempts, rather than negative messages (or worse yet, trying to control the uncontrollable media after a high-profile suicide).

Help us get the news out. Give a voice to those with lived experience facing down unbearable pain and surviving.

Perhaps if those three young teenage girls outside Dublin had heard someone like Dese’Rae Stage (Livethroughthis.org) talk about how she found a way to cope, they would have held on long enough to live.

It’s time to flip the metaphor. To not talk about people being “set free,” but people surviving.

It’s time to end the silence. To share messages of hope and encouragement from suicide attempt survivors.

It’s time to embrace that we are better together. To create an epidemic of survival.

One thought on “Spreading a Different Courage”