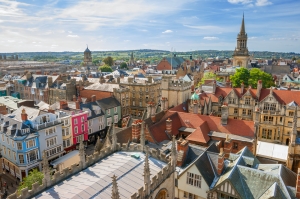 “We are at the beginning of this journey and we start out from the core value that no one of our patients should die alone and in despair by suicide.” This challenge, issued by Dutch psychiatrist Jan Mokkenstorm, became the shared declaration for the first international gathering of organizations committed to Zero Suicide in Health Care, who met along with others at the International Initiative for Mental Health Leadership (IIMHL) conference in Oxford UK on June 9-10.

Those who travelled to the UK explicitly for Zero Suicide included:

While the number of attendees promoting Zero Suicide was seemingly small, the organizations they represent employ thousands around the world. Centerstone, where Becky Stoll has led the development of a Zero Suicide protocol for several years, is the largest Community Mental Health Center in the US with nearly 3,000 employees across four states. GGZinGeest has 1,600 employees and a significant online presence in addition to its full continuum of behavioral health direct care, and has trained its staff in engagement and “good contact” to support those at risk for several years as well. Steve Duffy has traveled to see the Henry Ford Health System in Detroit, Michigan, Magellan Health in Phoenix, Arizona, and Nav Kapur’s team in Manchester, United Kingdom, as his team has been evaluating a Zero Suicide design for Hillmorton Hospital and its array of mental health programs.

Zero Suicide advocates joined a group of 25 other participants hailing from the UK, Australia, Canada, Ireland, New Zealand, and Sweden, led by Julie Kerry and Aarti Chapman from NHS England and Professor Keith Hawton, internationally renowned suicide prevention leader from the University of Oxford. The IIMHL program included presentations on a variety of suicide prevention topics, from means restriction to post-vention approaches, and ample time and open spaces provided opportunities for participants to network, share, and collaborate. 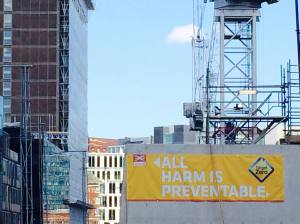 The summit opened with controversy as colleagues questioned the language of “Zero” Suicide. For some, it seemed to evoke other problematic initiatives that utilize “zero tolerance” approaches. We explained what we aspire to in our health care settings regarding Zero Suicide. I showed a photograph that Jerry Reed and I had taken the day prior while on a bus tour of London: a sign at a construction site that read, “All harm is preventable: Target Zero.”

In fact, the quality management language of frame-breaking change seemed to be ubiquitous during our trip overseas. It was the first time I had seen Unicef’s Zero campaign for child mortality, and others referenced language used by European leaders to render suicide a “never event.” Like Henry Ford Health System’s “Perfect Depression Care” initiative, these different programs all borrow from the language and principles of robust performance improvement, and all aspire to innovative solutions that will change paradigms and dramatically improve results.

At the end of the first day, though, those who had traveled to Oxford for Zero Suicide and those who had not discovered we had more in common than we realized. We all shared a passion and optimism to change the upward trends too many nations are experiencing, as well as our focus on systems-level improvement and top leadership commitment (despite what we labeled our individual approaches). In fact, leaders from the UK described their “Suicide Safer Care” initiative for Brighton, an approach inspired by a partnership between two members of the Clinical Care and Intervention Task Force that birthed Zero Suicide, Jenna Heise from Texas and Heather Stokes from Living Works.

After breaking into four smaller groups, the Zero Suicide network was frantically taking notes as the UK’s Jo Smith shared amazing advice for Zero Suicide’s advancement, based on lessons from her work with innovation diffusion around early psychosis treatment. “Antagonism and resistance are your friends in mobilizing a movement.” She shared the original declaration they had developed years ago, which begins “imagine a world where….” She confessed they lifted the format almost directly from innovators creating similarly “impossible” goals around diabetes care years earlier.

Jo instructed us on the stages of similar movements:

“People change what they do less because they are given analysis that shifts their thinking than because they are shown a truth that influences their feelings,” she said, and it resonated with us. As if to prove her point, Barry McGale shared with the larger group his initial resistance to the idea of Zero Suicide and later “being converted,” and others said they’d become “infected;” their initial resistance gave way to curiosity and then enthusiasm. Jo said Zero Suicide is a social movement and we should fan the flame with adherents working together to innovate solutions.

The social movement must also include those with lived experience, which was a major thread woven throughout the two days in Oxford. Eduardo Vega, Executive Director for the Center for Dignity, Recovery and Empowerment, joined us on the second day and related the outcomes of the prior day’s Peer Support and User Festival in London and how inclusion of peers qualitatively changes the discussion (as compared with meetings in which he has been the only self-disclosed peer/consumer).

Bringing this lived expertise to bear in strategizing change and improving services represents a  crucial next step to make Zero Suicide real, as reflected in the work of the Action Alliance task force on Suicide Attempt Survivors and the historic summit that occurred between those peer leaders and Zero Suicide.  In his presentation to the larger group, Barry McGale referenced this as well,  asking  “Why did it take us so long [to include peer leaders]?!”

Zero Suicide advocates came away feeling that we have so much to learn from one another, and we also met new friends and potential partners in Zero Suicide. Just one example included a very exciting conversation with Jennifer Vornbrock from the Mental Health Commission of Canada about how we might support one another’s efforts in 2015. In fact, before I left Europe, I had dinner with Fran Silvestri (CEO of IIMHL) and Ella Arensman (President of IASP), whose organizations will host international conferences in 2015 in Vancouver and Montreal, respectively. One team. One dream. 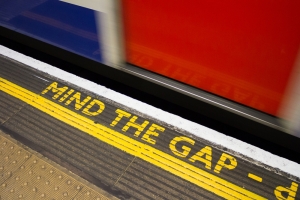 A week later, at the Dublin Dialogues in Ireland, I joined other leaders as we envisioned the future of mental health. Paddy McGowan concluded the presentations on the second day by delivering a powerful story about his wife’s suicide, playing the song “What’s Going On?”

There was much social chatter about his message and it’s impact, but I found it strangely ironic that nowhere in the chatter did the word “suicide” come up. It’s a gap that must not be overlooked.

Zero Suicide advocates remain positive in our commitment to usher in a new era of suicide care. We must “mind the gap” and support one another in this effort, partner with individuals with lived experience, and begin providing the kind of supports and services that will make the Oxford declaration a reality.

*Note: Special thanks to Fran Silvestri and Janet Peters for IIMHL’s leadership in matchmaking and creating the space for learning and unique partnerships to occur, and to Jerry Reed for supporting the organization of this first international meeting of Zero Suicide. Also would like to acknowledge Zero Suicide champions who were not able to join us in Mike Hogan and Julie Goldstein Grumet with whom we will be hosting the first Zero Suicide Implementation Academy June 26 – 27 in Washington, DC.

One thought on “The Oxford Declaration: No One Should Die Alone and in Despair”